An Assisted Living Resident’s Experience as an Oregon Duck 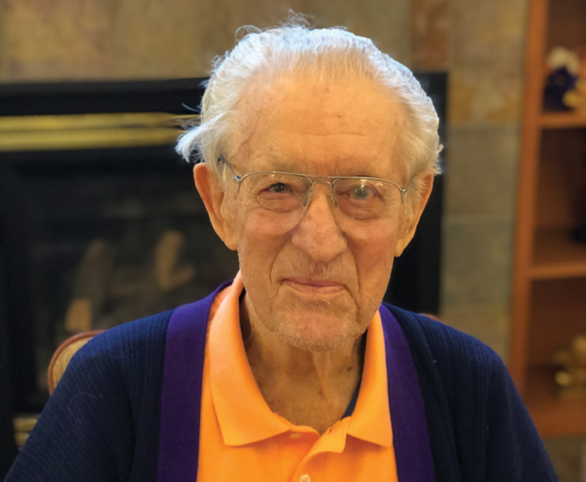 It was 1947 during the Civil War football game between two college rivals: University of Oregon and Oregon State University.

Oregon State scored a 58-yard pass in the third quarter, putting them on top. But the game wasn’t over just yet. Avamere at Hillsboro resident Darrell Robinson, an Oregon Ducks football player for the University of Oregon, caught a 24-yard touchdown pass late in the game that put them ahead 14-6.

The 1948 Civil War game would prove to be just as exciting for Darrell’s team, as he caught a pass that set up fellow player John McKay’s touchdown to clinch the win against Oregon State for the second year in a row.

And check out the Civil War game highlights in the Oregonian:

Following his passion for lumber

Darrell went on to work for the University of Oregon Athletic Department and noticed a lot of the sponsors came from the lumber industry, which is where he hoped to take his career. He landed an interview as a labor relations representative with Edward Hines Lumber Company in Westfir, Oregon.

His interviewer was none other than Lon Stiner, the Oregon State University Coach during the 1947 and 1948 games. Winning the Civil War game two years in a row cost Lon his coaching job, Lon admitted to Darrell.

Darrell replied, “I would do it all over again.”

Despite their rocky history, Lon hired Darrell, starting his career journey in the sales lumber industry.

Today Darrell lives at Avamere at Hillsboro, an independent living, assisted living, and memory care community in Hillsboro, Oregon. Stop by for a visit to hear Darrell’s rich stories!

Sharing Love Rocks at Avamere at Sandy
Next