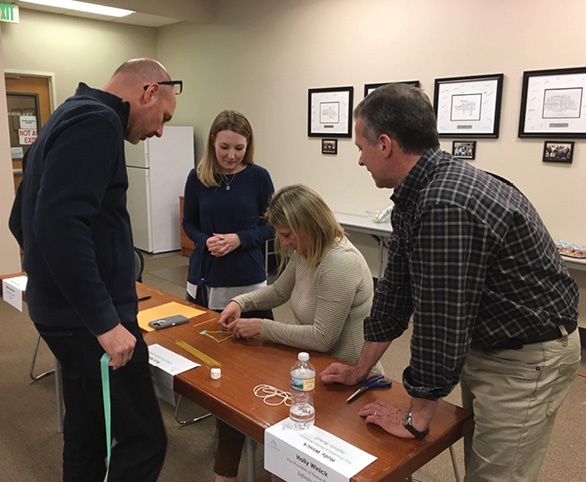 Leaders throughout the Avamere Family of Companies gathered together to participate in a first-ever Leadership Academy experience. But this program isn’t completely new (at least not to everyone in the Avamere Family).

Infinity Rehab launched the Leadership Academy in 2015 to offer professional development opportunities to their team members. Through the academy, employees (called scholars in the program) led change in their own community.

This program has provided the building blocks for Avamere leaders to have this, and potentially future, experience.

“I truly appreciated how intentional the leadership team was about immersing themselves in an afternoon focused on how to more effectively support and lead their teams,” Lynn said. “There were moments of introspection, challenge, curiosity, and mostly a unanimous interest in developing an organization focused on the leadership strength in each of us.”

There were 12 participants in the academy, including:

Following the Leadership Academy, Bob expressed that everyone has their own leadership capabilities.

“As a team, I learned we all have a responsibility to work on those areas that we struggle the most with and take a chance to go outside our leadership comfort zones,” he said.

Nicolette also learned to recognize areas of improvement to become better leaders, as well as the program’s focus to develop established leaders. She hopes this program fosters positivity and learning opportunities for the team members to enroll.

“I think the value is in the small groups and the support,” she said.

Mike, who was a coach in Infinity Rehab’s academy last year, was surprised by how the academy took abstract leadership principles and distilled them into actional behaviors that people can incorporate into their lives.

“Bottom line: It made me a better leader,” he said.

Practicing teamwork with a floating stick

The first activity stood out to Ron. Called Helium Stick, the scholars stood in two lines facing each other, held out their pointer fingers on each hand, and across the group rested a helium stick (aka a tent pole).

Their goal was simple: to lower the pole to the ground.

Their challenge: When attempting to lower the stick, it rises instead (which is where this team-building game gets its name).

In fact, the stick was already rising before Michelle finished giving the instructions!

The pressure from everyone’s fingers tends to be greater than the stick’s weight, causing it to rise the more the group tries to lower it. The purpose of this activity was to show the importance of clear communication to reach a common goal.

Michelle, who led this activity, said it takes breaking the task into smaller, more attainable steps and staying focused on those incremental steps.

It took the group a few tries to accomplish the task, but through communication, they finally succeeded. Mary and Nicolette, who were on opposite sides of the lines, took on the leadership role.

“One, two, three, lower,” they said as the team lowered the pole together every three seconds.

“What seemed to be such an easy exercise proved to be very difficult and required complete team effort,” Ron remarked.

As another team-building activity, participants built a structure out of spaghetti noodles, a marshmallow, and tape. One team had a creative solution to hang theirs from the ceiling. 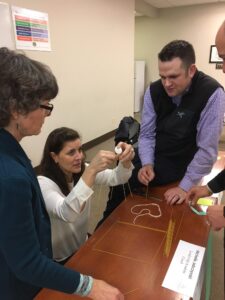 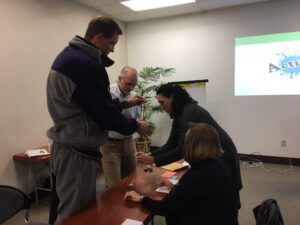 The takeaway from a memorable afternoon

Just like lowering a “helium pole” to the ground, leadership takes clear communication, teamwork, and drive.

These leaders gained great insight by participating in the Leadership Academy, proving that you can always learn and improve your skills no matter where you are in your career journey.

Symposium OT Courses You Won't Want to Miss
Next