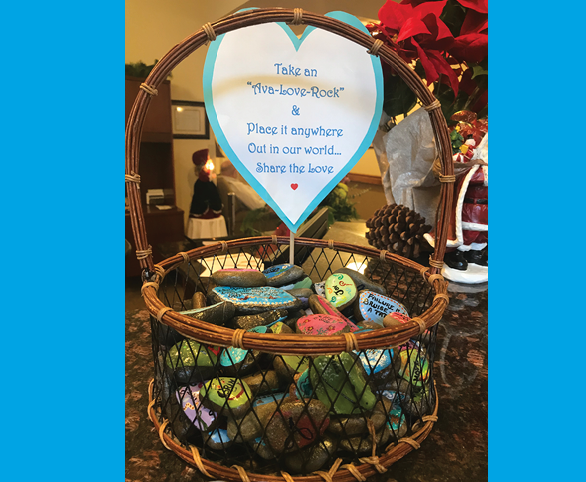 Retired veteran Brent Patterson was having a rough day when he decided to go to the movies. Little did he know that an afternoon at the cinema would turn his entire day around.

While at the movies, Brent came across a rock with a message of hope. On the back, he saw the Avamere A.

Recognizing the Avamere logo, he called Avamere at Sandy, an assisted living and memory care community in Sandy, Oregon. Thinking someone had lost the rock, Brent called to let them know he found it and to express his appreciation for the kind message.

Brian Hodson, a staff member at Avamere at Sandy, told him the rock was his to keep and invited Brent to read the message whenever he has a hard day or to spread the message by hiding the rock for someone else to find.

Brent was touched and shared with the staff that he is a retired veteran with an amputation below his knee. He expressed how the rock’s message made his day.

The artist behind the rocks

The rock Brent found was painted by a resident at Avamere at Sandy, who spreads smiles and love with her beautifully painted rocks.

Her passion started with an activity the senior living community staff held a few years ago, where they painted rocks. This sparked an interest in one resident, who continued to paint rocks.

A basket sits in Avamere at Sandy’s lobby featuring the love rocks, available for visitors, staff, and fellow residents to take wherever they go.

Susan Leininger, Community Relations Director for Avamere at Sandy, takes the resident’s rocks, writes the Avamere A on the backs, coats them, then sets them out in the lobby for people to hide.

“She absolutely loves it and is very artistic,” Susan said about the resident behind the love rocks.

Avamere at Sandy’s love rocks have made it from Sandy to the beach to Las Vegas and even to Ireland.

The staff don’t hear the found rock stories often, so hearing from Brent was special for the staff and the artist.

Her rocks have also been featured at their local library with artwork representing different children’s books.

“Everyone’s welcome to come share the love. Come in and get your rock,” Susan said. “If you find one, give us a call.”

Stop by Avamere at Sandy to pick up a rock to share! It could be just the pick-me-up someone needs to find.

The CNA Life at Avamere Court at Keizer
Next

An Assisted Living Resident’s Experience as an Oregon Duck