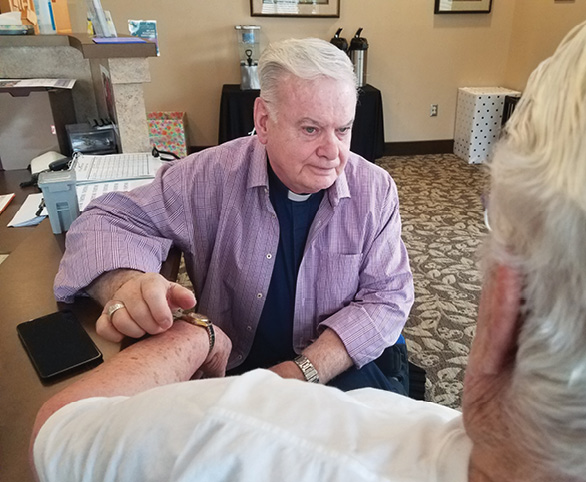 A couple and their two kids were boarding a plane to go home. The father had just had a nice visit with his grandmother along with his wife and children. Then they got a call that would change everything.

His grandmother had passed that morning. They got off the plane and went back to where his grandmother had called home –Laurelhurst Village, a senior living community in Portland, Oregon and part of the Avamere Family of Companies.

When they arrived, they met up with Father John McGrann, who welcomed them in for a memorial service.

Father John is a retired Catholic priest of the Archdiocese of Portland and current Pastoral Care Coordinator at Laurelhurst Village.

“It’s about being flexible and being happy to help people out,” Father John said about his job.

Emma was a Catholic. She was cheerful and inspired other residents to attend mass, Father John noted. She would even wink at him during communion!

Father John welcomes everyone to mass by name. During mass, they would talk about and pray for residents who were in the hospital or had other personal or family emergencies.

And Emma’s passing was no exception. They talked about Emma and the difficulties of saying goodbye.

“She was just here yesterday, but that’s the way life is,” Father John said. “It brings up thoughts to reflect on.”

Father John spends much of his time at Laurelhurst Village listening to residents, helping them let go of regrets, and helping them understand death. He encourages the residents to forgive others, forgive themselves, and be able to be at peace.

“I realize that I cannot change anybody,” Father John said. “I’m not here to be critical or tell people how to feel. I make gentle suggestions and listen.”

We live in a culture that denies death, according to Father John. He shares with residents that we are on a journey, and that there is an end to this life.

“How we live is a gift to people,” Father John said. “We make a difference. How we die is a gift we give to family and those around us. Hopefully we can die with affairs in order and in peace and deal with feelings of denial, bargaining, anger, and fear.”

Father John said those in long-term care need someone to bring up these difficult topics and let them share how they’re feeling. But they don’t just talk about the realities of death. They talk about their life accomplishments as well as regrets.

“I’m interested in people’s family and the kind of work they did and how they feel about their past life: their regrets, their joys, their feeling of fulfillment,” Father John said. “Sometimes people haven’t had an opportunity to talk about hurts they might have caused or how they have been wounded.”

Father John is there for those who need to talk to someone – to air what’s on their mind so they can feel peace.

“Our motto is a tradition of caring,” Father John said. “We’re not just serving people’s physical needs, but also their emotional needs. It’s all about love and helping the individuals love themselves.”

Father John doesn’t limit spreading peace and joy to residents – he uplifts the staff too!

“If I hear a funny story, I sometimes share it with staff,” he said.

He also sings to people on their birthday and encourages residents to write thank-you notes to staff, especially when they enjoyed a delicious meal.

He serves as a support for families as well. After a resident passes, he or another team member sends a card or calls the family to see how the Laurelhurst Village team can support them.

One of his favorite quotes is “Happy are those who possess what money cannot buy.”

“Personal qualities of a loving, compassionate heart, patience, and a sense of humor, a listening and generous presence – all awesome gifts that money cannot buy!” Father John shared. “I experience these gifts in our staff – those who provide hands-on care and all of those behind the scene. Together we serve these dear people so they feel loved as they come to the end of their life and prepare for what lies ahead for them.”

“I feel so honored and I am daily inspired by the kindness I see in those who provide care for our residents and patients.”

Editor’s note: The resident’s name has been changed to protect her family’s privacy.