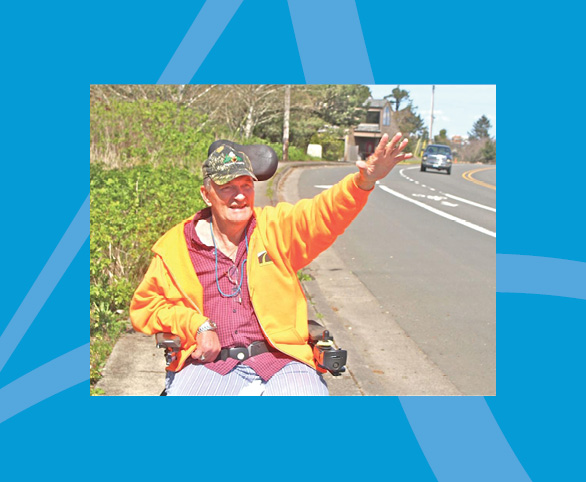 Those driving along U.S. Highway 101 in Seaside, Oregon receive a friendly smile and wave from local resident Gary Lewis.

A local paper shared Gary’s sweet tradition in 2015. He was living at Avamere at Seaside at the time in assisted living.

When the community announced their exciting building updates to welcome independent living in June 2019, Gary and his fellow assisted living neighbors moved to a nearby Avamere community, Suzanne Elise.

Today people can still sometimes catch Gary waving at passing cars along Wahanna Road. Pam Baldridge, Executive Director at Suzanne Elise, said some locals even go out of their way just to wave back.

Gary has a lively life story

Gary is an honored Veteran, having served in the army in Vietnam. Following his mandatory four years in the military, he re-enlisted for two more years. Gary received several honorable awards for his service: a National Defense Service Medal, a Vietnam Service Medal, a Vietnam Campaign Medal, a Bronze Star Medal, and a Meritorious Unit Commendation emblem among others.

Following his time in the military, Gary moved to Florida where he launched his career as an architect working on condominiums, commercial buildings, and more. Some of his work includes the World Tennis Center in Naples, Florida and the Shipps Landing Condominiums in Marco Island, Florida.

Gary now calls Suzanne Elise in Oregon home. He suffered a stroke in 1980 that left him unable to speak. However, he doesn’t let that stop him from finding other ways to communicate. Avamere staff say he has a cheery, independent personality. They describe him as friendly, social, and “a love.”

Take a drive by Suzanne Elise in Seaside, Oregon. You just might see Gary’s contagious smile.

Avamere Gives Celebratory Sendoff to Employee After 43 Years of Service