The Full Avamere Experience as Employee and Independent Living Resident 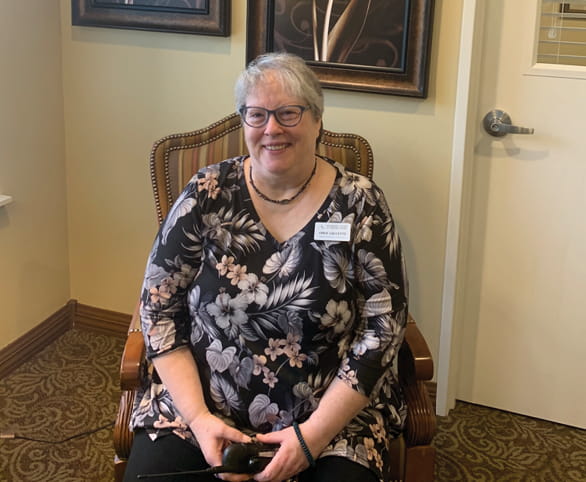 In her late 50s, April Gillette found herself unemployed after her store closed, where she had worked as a department manager for many years. It was already a difficult time in her life, as she had also unfortunately lost her parents amongst other major changes.

April took this closed chapter of her life as an opportunity to start a new career path – different from something she had ever done before. She began her search for the perfect fit.

A new career born from trial

“Wherever I worked, I wanted to work there the rest of my life,” April said. “I knew what a hard worker I was and that I could fit in if someone could give me a chance.”

Then she found Avamere Living at Berry Park. She was immediately drawn to the atmosphere, which she described as homey, inviting, and positive.

“I was really taken with all that,” she commented.

April started working with Avamere Living at Berry Park in 2016 as an Administrative Assistant. Just a few years later in 2018, she started a new adventure with Avamere. She moved into one of their independent living apartments.

“I think of myself as employee first and resident second,” April said.

One of her worries of moving in was how the residents might feel about her being both an employee and resident. But she received overwhelming support.

“It is such a great fit in every aspect,” April noted. “I love that the residents are so welcoming that I’m here.”

April particularly likes the laundry room availability at night, the in-house daily movie showings, and the fact that her commute is just a short walk from her front door.

She also loves the food, especially since she can enjoy a homecooked meal without having to cook.

“The food here is tremendous,” she said.

Friendships in co-workers and neighbors

April appreciates the support and friends she has in her co-workers and neighbors in her independent living community.

She especially enjoys hearing the residents’ stories. Growing up with veterans of World War II, April has a personal connection with them.

“Their stories are incredible,” she said. “It is a blessing and honor to work with them.”

April also enjoys the friendships she has built with her co-workers. The upper management strives to create a homey environment where everyone feels respected, April noted.

April has family in the Oregon City area and visits them often, but she knows she has another family in Avamere.

“I know when I come home, I’m surrounded by people I love – my neighbors and friends,” April said.

This isn’t just a job for April. This is her home, this is her family, and this is where she is happy.

“It’s been the best decision of my life,” April said about joining Avamere Living at Berry Park.

Get to know April for yourself! Stop by Avamere Living at Berry Park and see her smiling face greet you as you walk through the doors.

Avamere at Port Townsend Earns Award for Quality Care
Next