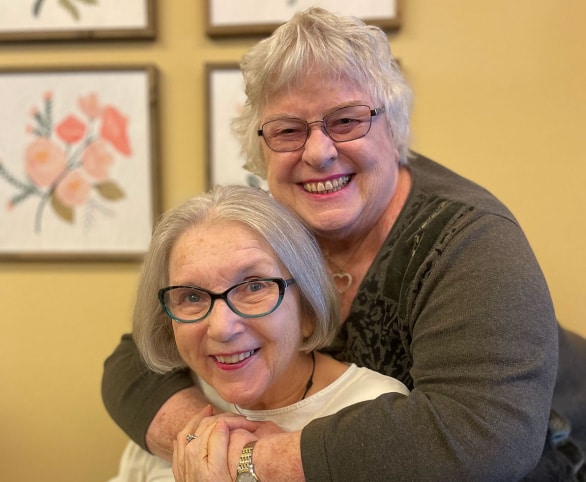 After losing touch for 52 years, Jane Kirkpatrick and Jane White found their lifelong friend living in the same building in Lake Oswego, Oregon.

The two were sorority sisters at the University of Oregon from 1960 to 1964, in each other’s weddings, and were close friends for years.

They lost touch in 1969 after one last lunch before Jane W. traveled overseas to Manila, Philippines.

Jane W. later returned to the United States to Los Angeles, California, where she ran her own marketing and communications firm, J.B. White & Co.

Jane K. was a first and second grade teacher. She later left this career to pursue her passion for ceramics, making porcelain jewelry with gold luster, wheel work, and hand building.

Jane K. moved to The Stafford in 2017, followed by Jane W. in 2018. The lifelong friends lived just one floor apart and didn’t even realize it … until September 2021.

Jane W. was reading a resident newsletter when she spotted “Jane Kirkpatrick” in a list of September birthdays.

“That couldn’t be Jane,” she thought. But she decided to investigate. She asked the concierge if they could tell her more about Jane Kirkpatrick. After seeing her photo, Jane W. exclaimed, “Oh my gosh. It’s Jane!”

She went to her friend’s apartment and knocked on the door. When she answered, Jane K. didn’t recognize her at first.

As soon as she said “Trucker,” Jane K. immediately recognized her lifelong friend.

Trucker was her nickname in college, a name she gave herself alluding to her opinion that she had a big bottom. Something large was considered a “truck,” so she told her friends to call her “truck” and the name “trucker” stuck with her, even 52 years later!

The two Janes were ecstatic to reunite once again. They sat on the couch talking about everything – life, family, what they’ve been up to, and fond memories.

“I have been smiling for two and a half weeks,” Jane W. shared.

Jane and Jane had fun getting in trouble together in college.

One night their freshman year, they hosted a house party for the seniors. It was such a hit that the fellow houses closed their parties to come to theirs.

Police arrived due to a noise complaint, but Jane W. thought they were in costume and complimented their outfits! The next day they presented a gift to the seniors, church keys they had decorated.

“I thought it was a wonderful idea,” Jane K. noted.

Her friend chimed in, “Well, it would have been the perfect idea had the police not been there the night before!”

The seniors named them their “rebel class.”

After college, the two were bridesmaids at each other’s weddings. Jane K. married Paul in August 1964, and Jane W. married Jack Barton in 1965.

They both had so much fun at their weddings that people had to tell them it was time to go!

Jane W. remembers combines proudly displayed on her wedding day, a farming machine the local townsfolk of Pendleton, Oregon were proud of. She later divorced and married Jack White, whose first wife also happened to be named Jane.

Jane K. remembers a black straw hat her mother made her wedding.

“It sat straight up,” she recalled, “I can’t believe I thought it was so cool, but I did.”

She smiled at the memory while her friend giggled.

Today at The Stafford

Jane and Jane love their home at The Stafford.

“We really hit the gold when we got here,” Jane W. shared. “Our apartment is everything that we need.”

Jane noted several things she loves at The Stafford, including food, exercise classes, underground parking, the small building size, and the adorable town of Lake Oswego.

Jane K. appreciates the artistic community as an artist herself.

Watch the video below to hear Jane and Jane’s story!

Find your home at The Stafford for boutique retirement living, where new friendships are formed and old friendships continue. 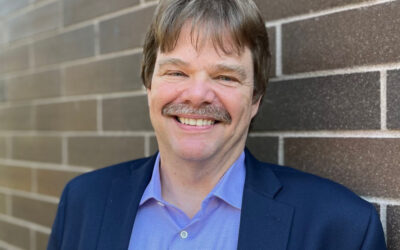 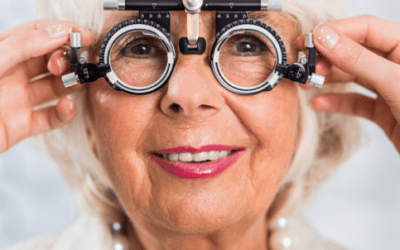 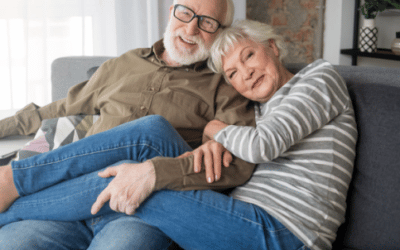